Jenna Marbles is an American YouTube personality, vlogger, comedian, and actress who has more than 20.2 million subscribers on YouTube and over 3.4 billion views on her videos. Marbles’s 2010 video titled, “How To Trick People Into Thinking You’re Good Looking”, was viewed over 5.3 million times in its first week. Her video, “How To Avoid Talking To People You Don’t Want To Talk To”, was featured in The New York Times and ABC News in August 2011. She became the first social media star to have a wax figure shown at Madame Tussauds Museum in New York City. Born Jenna Nicole Mourey on September 15, 1986 in Rochester, New York, she has an older brother named Devon. Marbles graduated from Brighton High School in 2004. She earned a Bachelor of Science in psychology at Suffolk University and Master of Education in sport psychology and counseling at Boston University. She has been in a relationship with YouTube creator Julien Solomita since 2013. 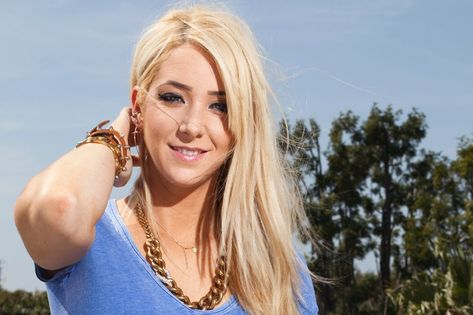 Jenna Marbles Facts:
*She was born on September 15, 1986 in Rochester, New York, USA.
*She created her YouTube account in April 2006.
*She created a line of dog toys and was in an episode of Epic Rap Battles of History.
*She became a vegan in 2015.
*She has a pet chihuahua named Mr. Marbles.
*Visit her official website: www.jennamarblesblog.com
*Follow her on Twitter, YouTube and Instagram.