Jennie Runk is an American plus-size model best known for appearing in H&M’s Summer 2013 beachwear campaign, which was featured on the front page of H&M’s United States website in late April 2013. She is also known for modeling for other famous designers and brands. She has been featured on the cover of fashion magazines such as Glamour, Cosmo Girl, Marie Claire, and several Seventeen editorials. She has modeled for many plus size retailers, including two Marina Rinaldi campaigns in 2012. She has also walked in several Elena Miro runway shows. Jennie was born on June 13, 1989 in Georgia, USA. Currently, she lives in New York City. 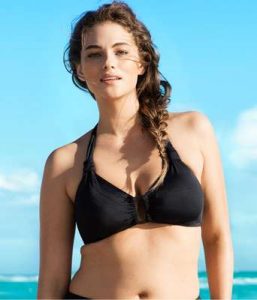 Jennie Runk Facts:
*She became a Girl Scout when she was 5 years old
*She owns a one-eyed cat named Jasmine.
*She and her family fosters dogs.
*She started modeling full time in 2011.
*She is the first plus size model to have appeared in H&M’s swimwear catalog.
*While in high school, she used to drive dad’s pickup truck with bright pink seat covers and feminist stickers.
*Follow Jennie Runk on Facebook and Instagram.