Rachel Griffiths is an Australian actress and director who rose to prominence by portraying the role of Rhonda Epinstall in the 1994 film Muriel’s Wedding and Hilary du Pré in the 1998 film Hilary and Jackie, for which she received an Academy Award nomination for Best Supporting Actress. She has played prominent roles in a number of films, including the 1997 film My Son the Fanatic, the 1998 film Amy, the 2000 film Me Myself I, and the 2002 film The Hard Word. She was born December 18, 1968, in Melbourne, Victoria, Australia, to Anna Griffiths and Edward Griffiths. Her mother, Anna Griffiths, is an art consultant. She has two older brothers. She married her longtime boyfriend Andrew Taylor in 2002. They have three children: son, Banjo Patrick, and two daughters, Clementine Grace, and Adelaide Rose. 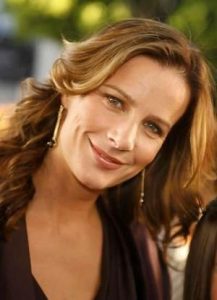 Rachel Griffiths Facts:
*She moved to Melbourne at the age of five.
*One of her older brother, Ben, is a ski instructor.
*Her father left home with an 18 year old woman when she was 11.