Jennifer Grey is an American actress who has starred in such films as Ferris Bueller’s Day Off and Dirty Dancing. For her performance in Dirty Dancing, she earned a Golden Globe Award nomination. In November 2010, Grey won the 11th season of Dancing with the Stars with her dance partner Derek Hough. She also starred as Judy Meyers in the Amazon Studios comedy series Red Oaks. Born on March 26, 1960 in Manhattan, New York, to parents Joel Gray and to Jo Wilder, she has one younger brother named James. She was educated at Dalton School and studied acting at the Neighborhood Playhouse School of the Theatre in Manhattan for 2 years. She started her career as a dancer in a Dr. Pepper TV commercial. She has been married to Clark Gregg since July 21, 2001. Together they have one daughter, Stella Gregg. 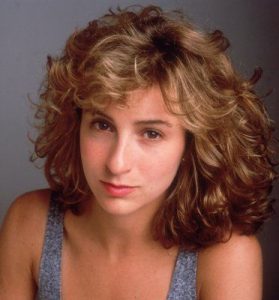 Jennifer Grey Facts:
*She was born on March 26, 1960 in Manhattan, New York, USA.
*She is the daughter of Broadway actor/dancer/choreographer Joel Grey and Jo Wilder, and granddaughter of Mickey Katz.
*She graduated from Dalton School in 1978.
*She studied acting at New York City’s prestigious “Neighborhood Playhouse” under legendary acting coach, Sanford Meisner.
*Classmate of Tracy Pollan at the private Dalton School in New York City.
*She won season 11 of Dancing with the Stars.
*She was previously engaged to Johnny Depp and Matthew Broderick.
*Follow her on Twitter, Facebook and Instagram.