Jennifer Hudson is a Grammy Award-winning American singer, actress and spokesperson. She first gained fame as a finalist on the third season of American Idol, where she finished in seventh place. She released her debut album, ‘Jennifer Hudson’ on September 27, 2008 via Arista Records. It charted at no. 2 in U.S., no. 21 in UK, no. 46 in Ireland. It was certified as “Gold” in US and UK and sold 839,000 copies in U.S. and 172,720 in UK. Her song “Love You I Do” won the Grammy Award for Best Song Written for a Motion Picture in 2008. She made her acting debut as Effie White in Dreamgirls in 2006, for which she received an Academy Award, a Golden Globe Award, a BAFTA Award and a Screen Actors Guild Award for Best Supporting Actress. Her other movie credits include, The Secret Life of Bees, Winnie Mandela and Sandy Wexler. Born Jennifer Kate Hudson on September 12, 1981 in Chicago, Illinois, to Darnell Donnerson and Samuel Simpson, she grew up as a Baptist in Englewood. She is a 1999 graduate of Dunbar Vocational Career Academy. She was in a relationship with WWE wrestler David Otunga from 2008 to 2017, with whom she had a son named David Daniel Otunga, Jr. in 2009. 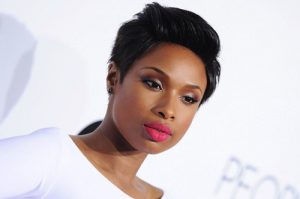 Jennifer Hudson Facts:
*She began singing at the age of 7.
*She became Weight Watchers spokesperson in 2010.
*She served as a guest judge in The X Factor UK in series 8 in 2011.
*She became the first contestant from American Idol (2002) to be nominated and receive an Academy Award.
*She cites Aretha Franklin, Patti LaBelle, and Whitney Houston as big influences.
*She does not smoke and drink.
*She used to work at Burger King before becoming a contestant on American Idol (2002).
*Visit her official website: www.jenniferhudson.com
*Follow her on Twitter, YouTube, Facebook and Instagram.