Shakira is a Colombian pop singer, songwriter and model. She is best known for the hit songs “Whenever, Wherever” and “Hips Don’t Lie”. Her official song for the 2010 FIFA World Cup, “Waka Waka”, became the biggest-selling World Cup song of all time. She won the 2001 Best Latin pop Grammy for her “MTV Unplugged” album. She has also done voice work in the Disney animated film Zootopia. Born Shakira Isabel Mebarak Ripoll on February 2, 1977 in Barranquilla, Colombia, to Nidia del Carmen Ripoll Torrado and William Mebarak Chadid, she is of Lebanese descent on her father’s side, and of Italian and Spanish descent on her mother’s side. She began her musical career at the age of 13 when she signed with Sony Music. She has been in a relationship with Spanish professional footballer Gerard Piqué since 2010. They have two children. 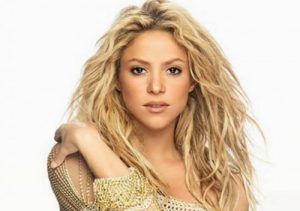 Shakira Facts:
*She wrote her first song at the age of 8 and signed her first record deal at 13.
*Shakira is in Arabic which means, grateful or full of grace.
*In addition to Spanish, she speaks English, Italian and Portuguese fluently.
*She served as a judge on the popular singing-competition show The Voice.
*Stuff magazine named her one of the top 102 Sexiest Women in the World in 2002. (#9)
*She was ranked #33 on VH1’s 100 Sexiest Artists.
*She has three dogs, Coquito, Chan and Gordita.
*Visit her official website: www.shakira.com
*Follow her on Twitter, YouTube, Google+, Facebook and Instagram.