Jennifer Saunders is a British comedian, actress, singer and screenwriter. She is best known for writing and playing the role of Edina Monsoon in the BBC sitcom Absolutely Fabulous. With her comedy partner Dawn French, Saunders wrote and starred in their eponymous sketch show, French and Saunders (1987). She has also done voice work in Shrek 2, Coraline, Minions, and Sing. Saunders is the recipient of various accolades including; three BAFTAs, a British Comedy Award, a Rose d’Or Light Entertainment Festival Award, two Writers’ Guild of Great Britain Awards, and a People’s Choice Award. Born Jennifer Jane Saunders on July 6, 1958 in Sleaford, Lincolnshire, England, UK, to parents Jane and Robert Thomas Saunders, she has three brothers. She attended Central School of Speech and Drama. She first became recognized in the 1980s when she became a member of The Comic Strip after graduating from the Central School of Speech and Drama in London. She has been married to Adrian Edmondson since May 11, 1985. They have three daughters: Beattie, Freya, and Ella. 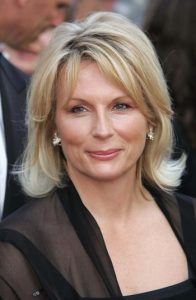 Jennifer Saunders Facts:
*She was born on July 6, 1958 in Sleaford, Lincolnshire, England, UK.
*Her mother was a biology teacher, and her father served as a pilot in the Royal Air Force, reached the rank of group captain, and later worked for British Aerospace.
*Following her high school graduation, she worked as an au pair in Italy for a year.
*In October 2013, she published her autobiography, Bonkers: My Life in Laughs.
*She was named the fourth funniest woman in Britain in a poll of 4,000 women in 2005.
*Follow her on Twitter and Facebook.