Jenny Agutter is a British film and television actress. She made her acting debut in the 1964 film East of Sudan when she was 12 years old. Her notable film credits include The Railway Children, Walkabout, Logan’s Run, The Survivor, The Avengers, Captain America: The Winter Soldier and An American Werewolf in London. Born as Jennifer Ann Agutter in Taunton, Somerset, England, Jenny is the daughter of Catherine and Derek Brodie Agutter, a former British Army officer. She has been married to Johan Tham since August 1990. Together they have one son, Jonathan Tham. 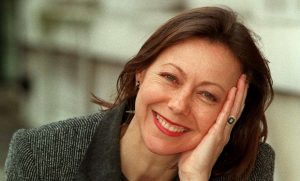 Jenny Agutter Facts:
*Her father is a former British Army officer, she spent her childhood traveling and living in different countries.
*She made her film debut in the 1964 film East of Sudan when she was 12 years old.
*Her husband, Johan is Swedish and a hotelier. They met at an arts fair.
*Currently, she resides in Cornwall, England, UK.
*Visit her official website: www.jennyagutter.net

“Fortunately, both television adaptations and the film I’ve been involved with are pieces of work that I’m proud of, so I’m very happy for people to focus on them.” – Jenny Agutter