Kiara Advani is an Indian film actress who appears in Bollywood films. She made her acting debut in Grazing Goat Pictures’ 2014 comedy drama film, Fugly opposite newcomer Mohit Marwah, Vijender Singh, Arfi Lamba and Jimmy Shergill. Kiara was born as Alia Advani on July 31, 1992 in Mumbai, India, to Jagdeep Advani, a businessman, and Genevieve Jaffrey, a teacher. She has a younger brother named Mishaal. She is the great granddaughter of Ashok Kumar and the great grand niece of Saeed Jaffrey. 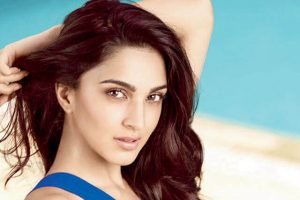 Kiara Advani Facts:
*Her mother, Genevieve Advani, is of half Muslim and half British descent.
*Her grandmother Bharti Jaffrey (Ashok Kumar’s daughter) is also an actress.
*Before pursuing a career in film, Advani did a short course in acting at Anupam Kher’s school of acting.
*Follow her on Twitter, Facebook and Instagram.