Jenny Ryan is an English television quiz personality and one of the “chasers” on the ITV game show The Chase. In July 2019, Jenny appeared on the 14th series of Celebrity MasterChef and began competing in The X Factor: Celebrity in October 2019. Apart from that Ryan has also appeared on Fifteen to One and The Weakest Link. Born Jenny Alexis Ryan on April 2, 1982 in Bolton, Lancashire, England, UK, she started her quizzing career writing questions for the Chase pilot in 2009. She is known by her nicknames The Vixen and The Bolton Brainiac. Ryan appeared on Mastermind in 2006, choosing the American television series Buffy the Vampire Slayer as her specialist subject, and featured in both series of the spin-off quiz show Are You an Egghead? in 2008 and 2009. 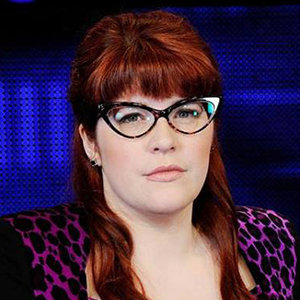 Jenny Ryan Facts:
*She was born on April 2, 1982 in Bolton, Lancashire, England, UK.
*She is one of the professional quizzers on the ITV game show The Chase.
*She competed in the 2014 World Quizzing Championship.
*Visit her official website: www.jennyvixenryan.com
*Follow her on Twitter, Facebook and Instagram.