German-born American actress Jeri Ryan is most famous for her portrayal of the Borg Seven of Nine in the science fiction television series Star Trek: Voyager, for which she won a Saturn Award for Best Supporting Actress on Television. She was born Jeri Lynn Zimmerman on February 22, 1968 in Munich, Bavaria, Germany. She is the daughter of Gerhard Florian Zimmerman, a Master Sergeant in the United States Army, and Sharon Zimmerman, a social worker. She married businessman Jack Ryan in 1991, and they had a son, Alex in 1994 before getting divorced in 1999. She married French chef Christophe Émé in 2007. Together they have one daughter, Giséle Lynn Émé. 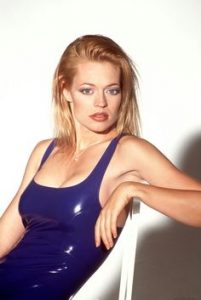 Jeri Ryan Facts:
*Her second husband, Christophe Eme, is a French chef who owns the restaurant Ortolan.
*She has watched her favorite tearjerker movie E.T. the Extra-Terrestrial several times and cried every time.
*In 2002, she was placed no. 65 in Stuff magazine’s “102 Sexiest Women in the World”.
*She crowned the title of 3rd runner-up in the 1990 Miss America Pageant.
*Follow her on Google+, Twitter, Facebook, YouTube and Instagram.