Josh Duhamel is an American actor and former model, best known for his role as Leo du Pres on All My Children, for which he won a Daytime Emmy Award, and as Danny McCoy in the TV show, Las Vegas. He also starred in the movies Transformers series. He was born Joshua David Duhamel on November 14, 1972 in Minot, North Dakota, USA. He is the son of Larry David Duhamel, an advertising salesman, and Bonnie L. Kemper, a retired high school teacher, and older brother to Ashlee, McKenzee and Kassidy. He belongs to French-Canadian, Irish, English, German and Norwegian descent. In January 2009, he married to his longtime girlfriend pop singer Fergie. Together they have one son, Axl Jack Duhamel. 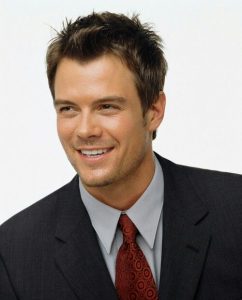 Josh Duhamel Facts:
*His parents got divorced during his youth.
*Before becoming an actor, he worked in a construction business.
*He wanted to be a dentist from the time he was a sophomore in high school.
*One of People magazine’s 50 Most Beautiful People in the World (2004).
*He enjoys football, basketball, golf and skiing on his free time.
*Follow him on Twitter, Facebook and Instagram.