Jerry Seinfeld was born Jerome Allen Seinfeld on April 29, 1954 in Brooklyn, New York, USA to Betty and Kálmán Seinfeld. He is an American comedian, actor, writer, and producer, best known for playing a semi-fictional version of himself in the sitcom Seinfeld, which he co-created and co-wrote with Larry David and was one of the most popular television comedians of all time. He was considered one of the leading roles in Mystery Science Theater 3000. 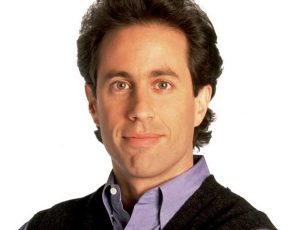 Jerry Seinfeld Facts:
*He began an internet comedy series, Comedians in Cars Getting Coffee where he chats with other comedians in 2012.
*He has a sister, Carolyn Liebling who is his manager.
*He has a collection of more than 500 sneakers. They are all white.
*He was the first recipient of the American Express Black Card.
*He is left-handed.
*Follow him on Twitter, Facebook and Instagram.