Jessi M’Bengue is a French model, songwriter and actress who starred in the music video for Robin Thicke’s song “Blurred Lines”. She has been featured in many international fashion magazines including Playboy and Oyster, and has modeled for campaigns including Victoria Secret’s, Pink, Aldo, Levi’s, and Coca-Cola. Born on December 27, 1989 in France, she is of Senegalese and Ivorian descent on her father’s side, and of French and Algerian descent on her mother’s side. M’Bengue was scouted by Chantale Nadeau, the founder of the famed modeling agency in Toronto. She first achieved fame after speaking out about the controversial lyrics of the single. 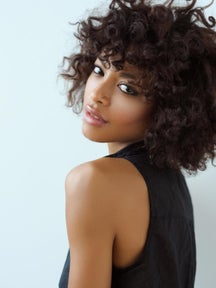 Jessi M’Bengue Facts:
*She was born on December 27, 1989 in France.
*She was born to French-Algerian mother and Ivorian-Senegalese father.
*She was featured in the music video for Robin Thicke’s song “Blurred Lines” alongside Emily Ratajkowski and Elle Evans.
*Visit her official website: www.jessimbengue.com
*Follow her on Twitter, YouTube, SoundCloud, Facebook and Instagram.