Amanda Nunes is a Brazilian mixed martial artist who competes in the Ultimate Fighting Championship. She is the reigning champion of the Women’s Bantamweight and Featherweight divisions. Nunes is the first woman in UFC history to become a two-division champion and the first woman in UFC history to hold two titles simultaneously. Born Amanda Lourenço Nunes on May 30, 1988 in Salvador, Bahia, Brazil, to parents Ivete and Sindoval Nunes, she started training in Karate when she was four years old and pursued training in boxing at the age of 16. She made her professional debut on March 8, 2008, at Prime MMA Championship 2, where she was defeated by Ana Maria via armbar submission in the first round. In 2014, Nunes began dating UFC fighter Nina Ansaroff. 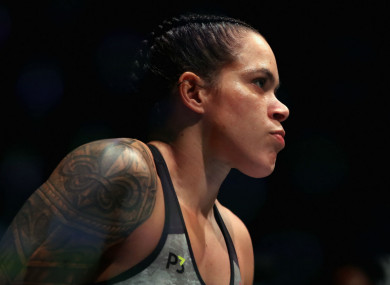 Amanda Nunes Facts:
*She was born on May 30, 1988 in Salvador, Bahia, Brazil.
*Growing up, she wanted to become a soccer player.
*She was introduced to Judo by her older sister, Vanessa.
*She joined boxing training classes at the age of 16.
*She began her professional career in 2008.
*On July 9, 2016, she defeated Miesha Tate for the UFC Women’s Bantamweight Championship and became the first openly gay champion in UFC history.
*On December 30, 2016, in the main event at UFC 207, she knocked out UFC superstar Ronda Rousey in just 48 seconds into the first round.
*Follow her on Twitter, Facebook and Instagram.