Jessica Alba is an American actress, model, and businesswoman, born April 28, 1981, in Pomona, California, USA, to Catherine and Mark David Alba, who served in the US Air Force. Her father is of Mexican descent and her mother is Danish, Welsh, German, English, and French ancestry. Born Jessica Marie Alba, who became worldwide recognized for her role in the James Cameron television series Dark Angel (2000–02), for which she won an ALMA Award for Breakthrough Actress of the Year in 2001. She appeared in Sin City and was named the Sexiest Woman in the World by FHM magazine in 2007. She also appeared in Honey, Into the Blue, Fantastic Four, Fantastic Four: Rise of the Silver Surfer and 2007’s Good Luck Chuck. She has been married to actor Cash Warren since 2008. She has two daughters, Haven and Honor. 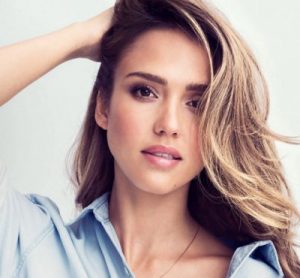 Jessica Alba Facts:
*She had the desire of becoming an actress from the age of five.
*People Magazine named her one of the top 50 Most Beautiful People in the World in 2005.
*She has a tattoo of a daisy with a ladybug on it on the back of her neck.
*She has the Sankskrit word for “lotus” tattooed on the inside of her wrist.
*She loves to play golf.
*Follow her on Twitter, Facebook, LinkedIn, and Instagram.