Jessica Iskandar is an Indonesian actress and model, born January 29, 1988, in Jakarta, Indonesia, to Hardi Iskandar and Wulandari. Jessica made her screen debut with a role as Karra in 2005’s Dealova. She then starred in Diva in 2007. She also starred in Kung Fu Pocong Perawan (Kung Fu Virgin Ghost) in 2012. As a host, she has appeared in several shows such as Dahsyat and Pesbukers. She has a son, El Barack Alexander. 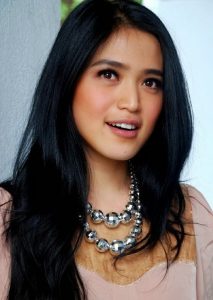 Jessica Iskandar Education:
She attended and majored in Interior Design at the University of Trisakti.

Jessica Iskandar Facts:
*Her mother is Christian and her father is a Muslim.
*She was acting while studying interior design at the University of Jakarta.
*Her 1st film was Dealova and her 2nd film was Diva.
*Website: www.jessicaiskandar.com
*Follow Jessica on Twitter, Facebook and Instagram.