Jessica Lu is an American actress, model, and spokesperson. She is best known for playing the role of Ming Huang in MTV’s TV series Awkward. Jessica’s other notable television credit include Law & Order: LA, CSI, and 90210. In 2018 she stars in the series Reverie. Born on April 18, 1985 in Schaumburg, Illinois, USA, to artistic parents who are from South Korea, she is of Chinese and Japanese descent on her father’s side, and of Chinese descent on her mother’s side. She has one younger brother named Andy. Jessica started dancing, specializing in ballet, tap, and jazz at the age of 6. She attended Columbia College Chicago, and graduated in 2008 with a degree in Musical Theatre Performance. 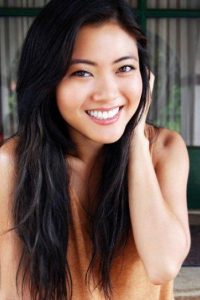 Jessica Lu Facts:
*She was born in Schaumburg, Illinois, USA on April 18, 1985.
*She is of Chinese and Japanese descent.
*She did print modeling and appeared in commercials while at junior high and high school with Jessy Schram and Jessica Szohr.
*She moved to Los Angeles in August 2008.
*She had a pet cat named Lucky and a dog named Oprah.
*Follow her on Twitter, Facebook and Instagram.