Jessy Schram is an American film and television actress and model. She is best known for television roles as Karen Nadler on Falling Skies, Veronica Mars, Rachel Seybolt on Life and Cinderella/Ashley Boyd on Once Upon a Time. Her films credits include American Pie Presents: The Naked Mile, Unstoppable, The Submarine Kid, Harvest Moon, Shot Caller, and The Birthday Wish. Born Jessica Schram on January 15, 1986 in Skokie, Illinois, USA, to parents Kristie and John Schram, she has a sister Nicole and brother Jonathan. She is of Lithuanian, German, and Irish descent on her father’s side, and of Dutch, Flemish Belgian, German, and English descent on her mother’s side. As a child, Jessy modeled and appeared in television commercials, and at 12 she started performing in musical theatre. She graduated in 2004 from Buffalo Grove High School. Jessy first played Susan Davis on Hallmark Channel’s Jane Doe series of television movies in 2005. 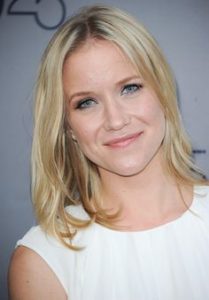 Jessy Schram Facts:
*She was born in Skokie, Illinois on January 15, 1986.
*She is a 2004 graduate of Buffalo Grove High School.
*She began modeling and appearing in television commercials as a child.
*She was appeared in a music video for J.R. Richards’ song “A Beautiful End”.
*Visit her official website: www.jessyschram.com
*Follow her on Twitter, Myspace and Instagram.