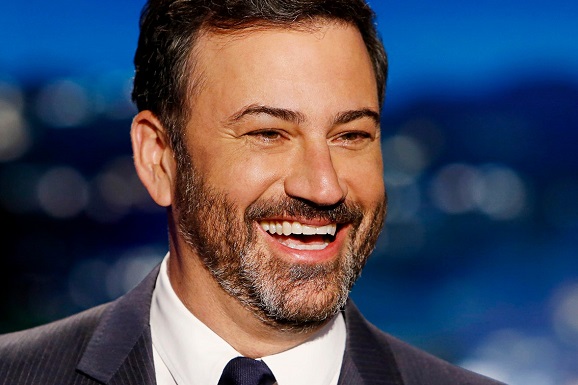 Jimmy Kimmel is an American television host, comedian, writer, and producer, best known as the host and creator of Jimmy Kimmel Live!, a late-night talk show, broadcast on ABC. Before hosting Jimmy Kimmel Live!, Kimmel was the co-host of Comedy Central’s The Man Show and Win Ben Stein’s Money. He has also produced such shows as Crank Yankers, Sports Show with Norm Macdonald, and The Andy Milonakis Show. He hosted the Primetime Emmy Awards in 2012, 2016 and 2020, and the Academy Awards in 2017 and 2018.

Born James Christian Kimmel on November 13, 1967 in Brooklyn, New York, he is the eldest of three children of Joan Iacono and James John Kimmel. He was raised Catholic and, as a child, was an altar server.

He married Molly McNearney on July 13, 2013. He has two daughters named Jane and Katie and two sons named Kevin and Billy. He was previously married to Gina Kimmel from 1988 to 2002.

Jimmy Kimmel Facts:
*He was born on November 13, 1967 in Brooklyn, New York City, New York, USA.
*He grew up in the neighborhood of Mill Basin.
*He graduated from Ed W. Clark High School.
*He began his Jimmy Kimmel Live! show on ABC in 2003.
*He received an honorary degree from University of Nevada Las Vegas in 2013.
*Time named him as one of “The World’s 100 Most Influential People” in 2018.
*He is friends with Don Rickles, David Letterman, and Joan Rivers.
*He is close friends with Ben Affleck.
*He is also an amateur sketch artist.
*Follow him on Twitter, Facebook, YouTube and Instagram.