Jo Collins is an American model. She is best known for being Playboy magazine’s Playmate of the Month for its December 1964 issue and Playmate of the Year for 1965. Her original pictorial was photographed by Mario Casilli. Born Janet Canoy on August 5, 1945 in Lebanon, Oregon, she belongs to both Norwegian and Spanish descent. She attended and graduated from North Eugene High School in Eugene, Oregon. She was discovered by Playboy while working as a page for the Queen for a Day TV game show, and went on to work as a Playboy Bunny at several Playboy Clubs and eventually became a Bunny Mother. [© celebsfacts.com] She was married to baseball player Bo Belinsky from 1970 to 1975. 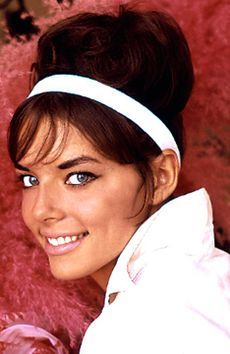 Playboy Playmate of the Year: 1965
Preceded by: Donna Michelle
Succeeded by: Allison Parks

Jo Collins Facts:
*She was born on August 5, 1945 in Lebanon, Oregon, USA.
*She earned the nickname G.I. Jo for her USO tours to Vietnam to entertain the troops during the Vietnam War.
*She was chosen as the Playmate of the Month for the December 1964 issue of Playboy magazine.
*She was named the 1965 Playboy Playmate of the Year.
*She posed for the “Playmates Forever!” pictorial in December 1979.