Joan Cusack is an American actress, best known for her roles in Working Girl as Cyn and In & Out as Emily Montgomery, for both these movies she received Academy Award nominations. For In & Out, she received a Golden Globe Award nomination as well. She also provided the voice of cowgirl Jessie in Toy Story 2 and Toy Story 3. She is also known for her recurring role as the wacky Sheila on Showtimes hit series Shameless. Born Joan Mary Cusack in New York City, New York, on October 11, 1962, to Dick Cusack and Ann Paula Cusack, Joan grew up in Evanston, Illinois. She is the sister of Ann Cusack, Susie Cusack, John Cusack and Bill Cusack. After graduating from Evanston Township High School in Evanston, Illinois, she completed her bachelor’s degree in English from University of Wisconsin-Madison in 1984. She has been married to an attorney, Dick Burke since 1993. They have two sons; Dylan and Miles. 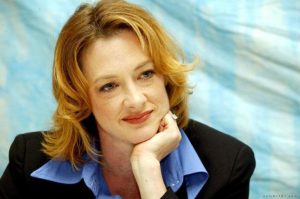 Joan Cusack Facts:
*She is the sister of Susie Cusack, Ann Cusack, John Cusack and Bill Cusack.
*She belongs to an actor family, including her father and all of her four siblings.
*She studied English at the University of Wisconsin.
*Her husband, Dick Burke, is a Chicago attorney.
*She has appeared in ten movies with her younger brother John Cusack.
*She used to work as a commercial spokesperson for U.S. Cellular.