Joan Jett is an American rock singer, songwriter and producer, best known as the lead vocalist of her band, Joan Jett & the Blackhearts. She is also a founding member of all-girl rock band The Runaways. She has been considered as the Queen of Rock ‘n’ Roll, the Godmother of Punk and the Original Riot Grrrl. Jett’s 1981’s single, “I Love Rock ‘n’ Roll” went to #1 on the Billboard charts. Her other hits include “Bad Reputation”, “Light of Day”, “Crimson and Clover”, “Do You Wanna Touch Me (Oh Yeah)”, “I Hate Myself for Loving You” and “Dirty Deeds”. She was inducted into the Rock and Roll Hall of Fame in 2015. Born Joan Marie Larkin on September 22, 1958, in Philadelphia, Pennsylvania, to James Larkin and Dorothy Jett Larkin, she is the eldest of three children, with brother James and sister Anne. She has English and Irish ancestry. She did her schooling from Randolph Junior High and Wheaton High School. She received her first guitar at the age of 14, and entered the music business at age 15 in the all-female rock band the Runaways. 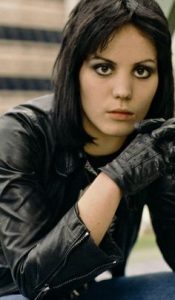 Joan Jett Facts:
*She was born on September 22, 1958, in Philadelphia, Pennsylvania.
*She is the oldest of three children with siblings Anne and James Larkin.
*Her parents divorced and she took her mother’s maiden name, Jett, as her professional and legal name.
*She is most notably for her number one song “I Love Rock n Roll”.
*She is left-handed, but plays the guitar right-handed.
*She ranked #32 on VH1’s 100 Greatest Women of Rock N Roll, and ranked #54 on VH1’s 100 Sexiest Artists.
*Visit her official website: www.joanjett.com
*Follow her on Twitter, Facebook and Instagram.