Joanne Calderwood is a Scottish professional mixed martial artist and former Muay Thai champion currently competing in the Women’s Flyweight division of the Ultimate Fighting Championship. She is Scotland’s first woman to go pro in mixed martial arts. Born on December 23, 1986 in Irvine, Scotland, she has one younger brother with whom she attended a class and started kickboxing. She started in Muay Thai in 2000 and was named STBA Fighter of the year in 2009. 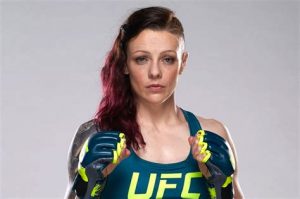 Joanne Calderwood Facts:
*She was born on December 23, 1986 in Irvine, Scotland.
*She began Muay Thai training in 2000.
*She became the Scotland’s first professional female mixed martial artist.
*She was named STBA Fighter of the year in 2009.
*She has a Blue belt in Brazilian Jiu-Jitsu.
*She is #10 in the official flyweight rankings. (December 18, 2018)
*Follow her on Twitter and Instagram.