Unge Ferrari is a Norwegian singer, songwriter and rapper, known for the hit singles “Hvis Du Vil” and “Lianer”. He released his debut album, Til Mine Venner, in February 2015, which was nominated for the Spellemann Prize. His 2018’s album, ‘Midt Imellom Magisk og Manisk’ debuted in first place on the VG list. He has collaborated with artists such as Lars Vaular, JNS, OnklP and Philip Emilio. Born on August 2, 1990 in Hamar, Norway, his birth name is Stig Joar Haugen. He studied music at the Norwegian School of Creative Studies. In 2018, he, Arif and Karpe formed a group called “MARS”. They released the self-titled album MARS on January 12, 2018. 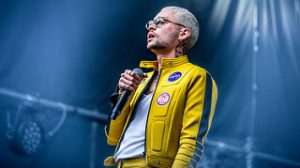 Unge Ferrari Facts:
*He was born on August 2, 1990 in Hamar, Norway.
*He debuted with his single, Hvis Du Vil.
*In 2014, he signed with Nora Collective for management purposes.
*Follow him on Twitter, Facebook and Instagram.