Joe Calzaghe is a Welsh former professional boxer who competed from 1993 to 2008. He was the WBA, WBC, IBF, WBO, Ring magazine, The Ring light-heavyweight, and The Ring Super Middleweight champion. He is the longest-reigning super-middleweight world champion in boxing history, having held the WBO title for over 10 years and making 21 successful defences before moving up to light-heavyweight. Born Joseph William Calzaghe on February 23, 1972 in Hammersmith, London, England, to Jackie (Welsh) and Enzo Calzaghe (Italian/Sardinian), his family moved to Wales when he was two. He married Mandy M. Davies in 1994, and the couple had two sons before getting divorced in 2005. 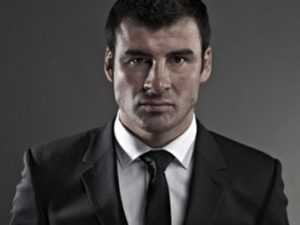 Joe Calzaghe Facts:
*He was born on February 23, 1972 in Hammersmith, London, England.
*He took up boxing at the age of nine.
*He was named BBC sports personality of the year in 2007.
*He was awarded the M.B.E. in the 2003 Queen’s Birthday Honors List before being awarded the C.B.E. in the 2008 Queen’s Birthday Honors List for his services to Sport and Voluntary Service in Wales.
*He became the first person to be awarded the Freedom of Caerphilly County Borough, in 2009.
*In 2014, he was inducted into the International Boxing Hall of Fame.
*From 2009 to 2013, he was in a relationship with Kristina Rihanoff.
*Visit his official website: www.joecalzaghe.com
*Follow him on Twitter and Instagram.