Dennis Haysbert is an American actor. He is best known for his roles as U.S. Senator David Palmer in the television series 24, and Sergeant Jonas Blane in the CBS action-drama The Unit. He played baseball player Pedro Cerrano in the Major League film series, and portrayed Secret Service Agent Tim Collin in the 1997 political thriller film Absolute Power. He has also appeared in such films as Love Field, Heat, Waiting to Exhale, and Far from Heaven. He has also done voice work in Sinbad: Legend of the Seven Seas, Kung Fu Panda 2, Kung Fu Panda: Secrets of the Masters, Wreck-It Ralph, and Mr. Peabody & Sherman. Born Dennis Dexter Haysbert on June 2, 1954 in San Mateo, California, USA, he is the eighth of nine children of Charles Whitney Sr. and Gladys Haysbert. He graduated in 1972 from San Mateo High School in San Mateo, California, and studied acting at the American Academy of Dramatic Arts. He became the commercial spokesman for the Allstate Insurance Corporation (2003-08). He was married to Lynn Griffith from 1989 to 2001 and Elena Simms from 1980 to 1984. He has two children with Lynn Griffith. 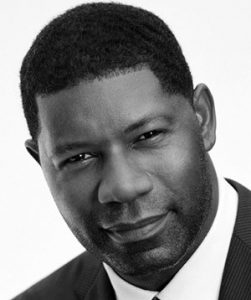 Dennis Haysbert Facts:
*He was born on June 2, 1954 in San Mateo, California, USA.
*He was raised Baptist.
*He appeared as the official spokesman for the Allstate Insurance Company.
*He enjoys tennis, golf and scuba diving in his spare time.
*Visit his official website: www.dennishaysbert.tv
*Follow him on Twitter, Facebook and Instagram.