Joelle Hatem is a Lebanese model born in South Carolina, United States. Joelle began her modeling career in Lebanon at the age of 18. She has appeared on Lebanese magazines such as Focus, Maculin, and Special. She was born on February 2, 1979 in Charleston, South Carolina, United States, the daughter of Ingrid and Joe Hatem. Her mother is Brazilian and her father is Lebanese. She was previously married to Lebanese singer George Al Rassi. They have a son together. 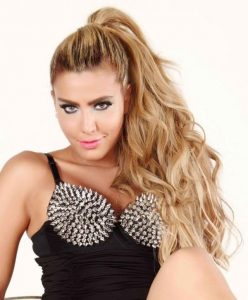 Joelle Hatem Facts:
*She was born in Charleston, South Carolina, United States.
*Her mother is Brazilian and her father is Lebanese.
*She was a candidate in the Miss Lebanon Contest of 1997.
*Her favorite colors are bronze and gold.
*Visit her official website: www.joellehatem.com
*Follow her on Twitter, Facebook and Instagram.