Actor and model, Norman Reedus is most famous for his portrayal of Daryl Dixon in the horror TV series The Walking Dead, and as Murphy MacManus in the 1999 film The Boondock Saints. His other notable film credits include American Gangster, Mimic, Dark Harbor, Blade II, Antibodies, Hello Herman, Hero Wanted, Moscow Chill, Six Ways to Sunday, and Deuces Wild. Norman was born as Norman Mark Reedus in Hollywood, Florida, to Marianne, a teacher, and Norman Reedus. He belongs to English, Irish, Italian, and Scottish descent. He has one younger sister named Leslie. He was in a relationship with supermodel Helena Christensen from 1998 to 2003. They have a son together. 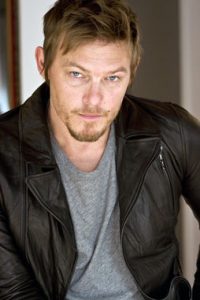 Norman Reedus Facts:
*He made his debut in the 1997 film Mimic.
*He has a black cat named ‘Eye in the Dark’.
*He is fond of wearing masks and owns about 50 of them.
*He is also a sculptor, painter, and photographer.
*He owns New York-based film production company, Bigbaldhead.
*As a result of his car accident in 2005, he has a titanium eye-socket.
*Follow him on Twitter, Facebook, Tumblr and Instagram.