Actress Joey King is best known for her portrayal of Ramona Quimby in the 2010 film Ramona and Beezus, for which she won the Young Artist Award. Her other film roles include The Kissing Booth, The Conjuring, Reign Over Me, Oz the Great and Powerful, White House Down and Crazy, Stupid, Love. Born Joey Lynn King in Los Angeles, California, she is the daughter of Jamie King and Terry King. She is of Ashkenazi Jewish and English descent and has two older sisters, Kelli and Hunter King. She has been in a relationship with her The Kissing Booth co-star Jacob Elordi since 2017. 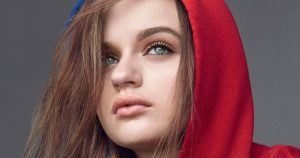 Joey King Facts:
*She belongs to Ashkenazi Jewish and English descent.
*She is the younger sister of actresses Hunter and Kelli King.
*At age 6, she appeared in her first film, Grace (2006).
*She is good friends with Selena Gomez, Taylor Swift and Mackenzie Foy.
*She was the official spokesperson for D.E.A.R (Drop Everything And Read).
*She was named after her grandfather Joseph.
*She has two dogs named Charlie and Angel.
*Follow her on Twitter, Facebook and Instagram.