Blake Griffin is a professional basketball player who plays the position of Power forward for the Los Angeles Clippers. Griffin was born on March 16, 1989 as Blake Austin Griffin in Oklahoma City, Oklahoma, USA to Tommy and Gail Griffin. He was raised with his older brother, Taylor Griffin. His father is of Afro-Haitian descent, and his mother is Caucasian. He has a son named Ford with Brynn Cameron, a former women’s NCAA basketball player for USC. 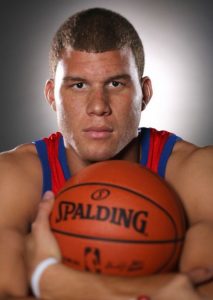 Blake Griffin Education:
School: Oklahoma Christian School (2003–2007)
University: University of Oklahoma (2007–2009)
He was home-schooled by their mother from first grade until he was in the tenth grade.

Blake Griffin Facts:
*He was selected as the 1st overall in the 2009 NBA Draft.
*He played college basketball with his older brother Taylor Griffin at the University of Oklahoma.
*He was Sports Illustrated Player of the Year
*Before he focused on becoming a basketball player, Blake played baseball and American football.
*Follow him on Twitter, Facebook, Google+, and Instagram.