Johanna Braddy is an American actress. She is known for her roles in television, such as Greek, The Riches, Unreal, and Quantico, and in the films The Grudge 3, Hurt, Easy A, Paranormal Activity 3, The Levenger Tapes, and Believe Me. From 2012 to 2014, Braddy starred as Jenny Matrix in the web series Video Game High School. She has also done voice work in Surf’s Up, Ponyo, and Avatar: The Last Airbender. 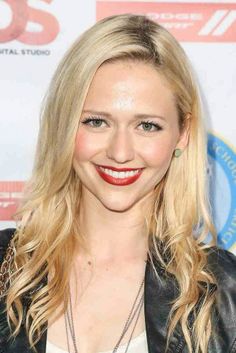 Born Johanna Elizabeth Braddy on August 30, 1987 in Atlanta, Georgia, to parents Steven “Steve” and Jo Beth Braddy, she has one younger brother named Cole. Braddy graduated from McIntosh High School in Georgia in 2005. In 2016, she married actor Freddie Stroma. She was previously married to Josh Blaylock.

Johanna Braddy Facts:
*Born on August 30, 1987 in Atlanta, Georgia, her father is an engineer and her mother is a preschool music teacher and a vocalist.
*She was the Captain of her High School Dance Team.
*She began her career in the arts, working with The Atlanta Workshop Players, a performing arts company.
*She made her screen acting début as Olivia Harden in the ABC Family television film Pop Rocks.
*In 2015, she was cast as a series regular in the ABC thriller Quantico along with Priyanka Chopra, Jake McLaughlin, Yasmine Al Massri, Graham Rogers and Aunjanue Ellis.
*Follow her on Twitter, Facebook and Instagram.