Grace Kelly was an American actress who starred in such films as Dial M for Murder, Rear Window, To Catch a Thief, The Country Girl, and became Princess of Monaco by marrying Prince Rainier III in April 1956. Born Grace Patricia Kelly on November 12, 1929 in Philadelphia, Pennsylvania, to an affluent and influential family, her father, John B. Kelly Sr., was an Irish American; her mother, Margaret Majer, was a German American. Kelly graduated from the American Academy of Dramatic Arts in 1949. She married Prince Rainier III of Monaco in April 1956, and became Her Serene Highness The Princess of Monaco. She had two daughters, Caroline, Princess of Hanover and Princess Stephanie of Monaco, and a son, Albert II, Prince of Monaco. Kelly died on September 14, 1982 at Monaco Hospital, succumbing to injuries sustained in a car crash the previous day. She was just 52 years old. 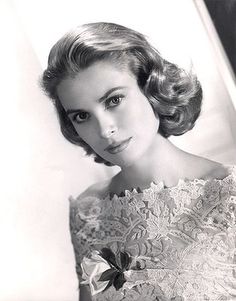 Grace Kelly Facts:
*She was born on November 12, 1929 in Philadelphia, Pennsylvania, USA.
*Her father was a champion sculler who won three Olympic gold medals as part of the U.S. rowing team.
*She danced and acted in high school productions.
*She applied at Bennington College in Bennington, Vermont but got rejected due to her low maths score (1947).
*She debuted on television in the play “Old Lady Robbins” (1948) on the anthology series, Kraft Television Theatre.
*She made her big screen debut in Fourteen Hours (1951).
*Empire magazine named her one of the top 100 Sexiest Stars in film history (#5) in 1995.
*She was voted #27 Greatest Movie Star of all time by Entertainment Weekly.
*She was voted #12 Greatest Movie Star of all time by Premiere magazine.
*She was the first actress to appear on a postage stamp.
*Actress Rita Gam was among her bridesmaids.
*She was ranked #86 in Men’s Health magazine’s 100 Hottest Women of all Time. (2011)
*She is listed 13th among the American Film Institute’s 25 Greatest Female Stars of Classical Hollywood Cinema.
*Her favorite actors were Joseph Cotten and Ingrid Bergman in her youth.
*She was good friends with actress Maureen O’Hara.
*She is one of the many movie stars mentioned in Madonna’s song “Vogue”.
*She was mentioned in Billy Joel’s song “We didn’t start the fire” and in Mika’s song “Grace Kelly” (2007).
*She dated Gene Lyons from May 1951 to November 1952.
*She was romantically linked with fashion designer Oleg Cassini.
*She broke off her engagement to Oleg Cassini to marry Prince Rainier of Monaco.
*She was a registered Democrat and her family was close friends with Franklin D. Roosevelt during his administration.