Johanna Konta is a British tennis player who achieved her career’s best ranking on July 17, 2017, which was #4. She represented Australia until 2012. She started hitting tennis balls at the age of eight and won her first professional tournament at age 16. Konta was born on May 17, 1967 in Sydney, Australia, to Hungarian parents, Gabor Konta and Gabriella Cortez. She moved from Australia to Spain to attend the Sánchez-Casal Academy in Barcelona. She then moved to Eastbourne with her family at the age of 14 and became a UK citizen in 2012. 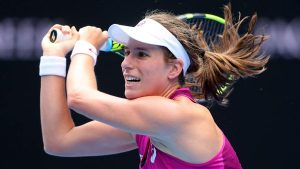 Johanna Konta Facts:
*She was born to Hungarian Parents.
*She was only 8 when she started playing tennis.
*At the age of 16, she won her first professional tournament.
*She moved to Eastbourne with her family in 2005.
*She became a British citizen in 2012.
*Her Grandfather Played Soccer Professionally.
*Follow her on Twitter, Facebook and Instagram.