John Goodman is an American film, stage and television actor and singer. He is best known for his role as Dan Conner on the ABC TV series Roseanne, for which he won a Best Actor Golden Globe award in 1993. He reprised the role in its sequel series The Conners. Goodman is also known for his roles in television, such as Amazon Studios’s Alpha House, HBO’s Treme, The Righteous Gemstones, and Damages, and in the films Always, King Ralph, The Big Lebowski, O Brother, Where Art Thou?, Raising Arizona, Barton Fink, The Babe, The Flintstones, Blues Brothers 2000, Inside Llewyn Davis, and 10 Cloverfield Lane. He has also done voice work in Disney’s The Emperor’s New Groove franchise, Pixar’s Monsters, Inc. franchise, The Jungle Book 2, Clifford’s Really Big Movie, Bee Movie, and The Princess and the Frog. Goodman has also won two American Comedy Awards and has hosted Saturday Night Live several times.

Born John Stephen Goodman on June 20, 1952 in Affton, Missouri, to parents Virginia and Leslie F. Goodman, he is of English, German, and Welsh descent. He has a younger sister named Elisabeth (born after father’s death), and an older brother named Leslie. John graduated from Affton High School in Affton, MO, and earned his Bachelor’s degree in Fine Arts from Southwest Missouri State University in Springfield, MO (1975). He is married to Anna Beth Hartzog. Together they have one daughter, Molly Evangeline Goodman. 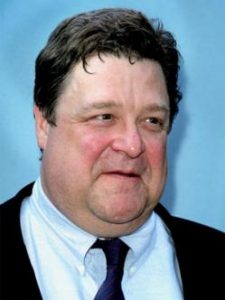 John Goodman Facts:
*Born on June 20, 1952 in Affton, Missouri, he was raised Southern Baptist.
*He played football and basketball in high school, earning a college scholarship for football.
*His first job was as a bouncer.
*He is a huge fan of the St. Louis Cardinals baseball team.
*He enjoys fishing and playing golf.