Sai Pallavi is an Indian film actress and dancer who appears mainly in Tamil, Malayalam and Telugu films. She came to prominence after being cast in the 2015 Malayalam film Premam. She made her Telugu debut in the 2017 romantic film Fidaa. Pallavi made her Tamil debut playing the role Thulasi in the 2018 film Diya, directed by Vijay. In 2018, she starred as Araathu Aanandi in the Tamil movie Maari 2, a sequel to Maari, opposite Dhanush, directed by Balaji Mohan. A song from the movie, Rowdy Baby, has hit over one billion mark on YouTube. She won two Filmfare Awards for her performances in the films Fidaa and Premam. Born Sai Pallavi Senthamarai on May 9, 1992 in Kothagiri, Tamil Nadu, India, to parents Radha and Senthamara Kannan, her younger sister, Pooja, is also an actress. Pallavi did her schooling from Avila Convent School, Coimbatore, and completed her MBBS (medical degree) in 2016 from the Tbilisi State Medical University, Georgia. 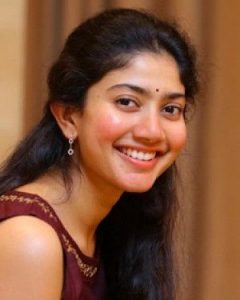 Sai Pallavi Facts:
*She was born on May 9, 1992 in Kothagiri, Tamil Nadu, India.
*She started her acting career as a child artist in the 2005 Tamil movie, Kasthuri Maan.
*She is a trained dancer.
*She declined a Rs.2 crore worth advertisement-contract for a skin lightening cream saying it wasn’t something she believed in.
*Follow her on Twitter, Facebook and Instagram.