John Krasinski is an American film and television actor, screenwriter, producer, and director. He is best known for his portrayal of Jim Halpert in the hit TV show “The Office.” He also directed and played the role of Lee Abbott in the 2018 horror movie A Quiet Place. Krasinski’s other notable films include License to Wed, Away We Go, Leatherheads, A Quiet Place, Promised Land, Aloha and 13 Hours: The Secret Soldiers of Benghazi. Born John Burke Krasinski on October 20, 1979, in Boston, Massachusetts, to Mary Claire and Ronald Krasinski, his father is a doctor, and his mother is a nurse. He has two older brothers, Kevin (doctor) and Paul (strategic consultant). He is of Polish descent on his father’s side, and of Irish descent on his mother’s side. Following graduation from Newton South High School in 1997, Krasinski attended graduated in 2001 from Brown University as an honors playwright with a B.A. in English literature. He married English actress Emily Blunt in 2010. Together they two daughters, Hazel and Violet. 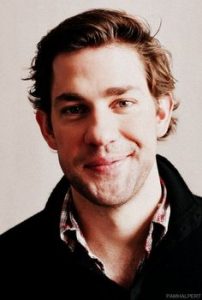 John Krasinski Facts:
*He was born in Boston, Massachusetts on October 20, 1979.
*He belongs to both Polish and Irish descent.
*He was raised in Newton, a suburb west of Boston.
*One of People Magazine’s Sexiest Men Alive 2006.
*His childhood crushes were Vanna White and Molly Ringwald.
*He is a staunch liberal Democrat.
*He has a pet dog named Finn.
*Follow him on Twitter, Facebook and Instagram.

Thank you to @menshealthmag for putting this dude on the cover