Jonathan Rhys Meyers is an Irish actor, model and musician. He is best known for his roles in the films Michael Collins, Velvet Goldmine, August Rush, Damascus Cover, Bend It Like Beckham, Alexander, From Paris with Love, Match Point, and Mission: Impossible III. He is also known for television roles as King Henry VIII on The Tudors, Elvis Presley on Elvis, Dracula / Alexander Grayson on Dracula, and Heahmund on Vikings. Meyers won the Best Actor award at the 2018 Manchester Film Festival for his starring role in Damascus Cover. In 2020, he was named as number 44 on The Irish Times list of Ireland’s greatest film actors. Born Jonathan Michael Francis O’Keeffe on July 27, 1977 in Dublin, Ireland, to parents Mary and John O’Keeffe, his three younger brothers: Jamie O’Keeffe, Paul O’Keeffe and Ali O’Keefe, are professional musicians. He was educated at North Monastery Christian Brothers School. From 2004 to 2012, Meyers was in a relationship with Reena Hammer. He has a son with his wife, Mara Lane. 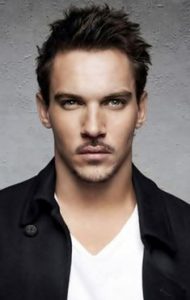 Jonathan Rhys Meyers Facts:
*He was born on July 27, 1977 in Dublin, Ireland.
*He grew up in Cork, County Cork in a Roman Catholic family.
*He was expelled from North Monastery Secondary School for truancy at age 16.
*He won a Golden Globe Award for his role in the TV miniseries Elvis (2005).
*His favorite actors are Cillian Murphy and Joaquin Phoenix.
*He idolizes Johnny Depp.
*He is friends with fellow Irish actor Katie McGrath.
*He is an ambassador for the children’s charity, Barretstown.