Jordan Rodrigues is an Australian singer, actor and dancer. He is best known for television roles as Jai Fernandez on Home and Away (2008–2009), Christian Reed on Dance Academy (2010–2013), and Mat Tan on The Fosters (2014–2018). He has also played prominent roles in the films Breaking Through (2005), Lady Bird (2017), and Light as a Feather (2018). Born on July 20, 1992 in Sydney, Australia, to Malaysian parents Julie and Brian Rodrigues, Jordan is the youngest child in his family alongside his brother Shaun and sister Rachel. He attended Turramurra High School. He made his acting debut as Young Simba in The Lion King’s Australian tour at the Capitol Theatre. 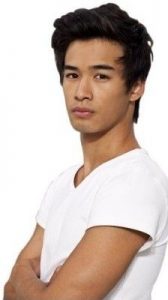 Jordan Rodrigues Facts:
*He was born in Sydney, Australia on July 20, 1992.
*His parents are Malaysian.
*He trained for over ten years at Brent Street, he has studied jazz, ballet, hip hop, drama and singing.
*Follow him on Twitter, Facebook and Instagram.