Jorja Fox is an American actress and producer. She is best known for her roles as Dr. Maggie Doyle in the NBC medical drama ER, Agent Gina Toscano in the NBC political drama The West Wing, and as Sara Sidle in the CBS police procedural drama CSI: Crime Scene Investigation. She has also played prominent roles in the films The Hungry Bachelors Club, 3 Weeks to Daytona, How to Make the Cruelest Month, and Forever Fabulous. Fox’s other notable works include ABC Afterschool Specials, Missing Persons, and House of Frankenstein. Born Jorja-An Fox on July 7, 1968 in New York City, New York, to parents Marilyn and Edward Fox, she has an older brother named Jeff. She belongs to French Canadian, Belgian and Irish descent. She attended Melbourne High School for two years and began a modeling career after winning a local contest. She studied drama at the Lee Strasberg Institute in New York, under the tutelage of actor William Hickey. Fox first gained attention with her recurring role in the NBC medical drama ER as Dr. Maggie Doyle. From 2001 to 2002, she dated her CSI co-star Gary Dourdan. 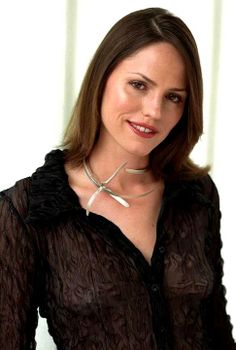 Jorja Fox Facts:
*She was born on July 7, 1968 in New York, New York, USA.
*She was raised on a narrow barrier island in Melbourne Beach, Florida.
*She began her career as a fashion model.
*In 2003, she ranked #80 in Stuff’s “103 Sexiest Women”.
*She is good friends with actress Amy Carlson.
*She is an environmental and animal welfare advocate.
*She has a dog named Bexar.
*Visit her official website: www.jorjafox.com
*Follow her on Facebook and Twitter.