Jorja Smith is a British R&B singer and songwriter who first came to prominence with her debut single ‘Blue Lights’, which was nominated in the Best Song category in the 2016 MOBO Awards. Follow-up singles Where Did I Go? and A Prince gave her more momentum as an artist. Jorja was born Jorja Alice Smith in Walsall, England, to a Jamaican father and an English mother. She has appeared in Vogue, Dazed, i-D, Fader, Elle, The Guardian, The Sunday Times, Hunger, DIY, Clash, Complex and many more. 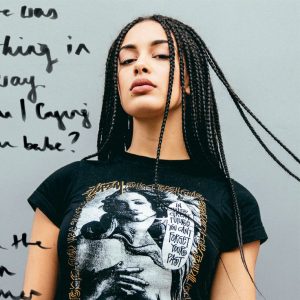 Jorja Smith Education:
*She won a music scholarship to a prestigious local school.

Jorja Smith Facts:
*She was one of 15 artists selected for the BBC’s 15 Sound of 2017 longlist.
*She is from a musical family, her dad was in a local band called 2nd Naicha.
*She wanted to be a singer since the age of eight.
*She was only 11 when she wrote her first song called “Life is a Path Worth Taking”.
*Follow her on Twitter, Facebook, YouTube, and Instagram.