Josh Brolin is an American actor. He has played prominent roles in a number of films, including No Country for Old Men, American Gangster, Men in Black 3, True Grit and Milk. He received Academy Award and SAG Award nominations for Best Supporting Actor for his role in Milk. Brolin was born Josh James Brolin February 12, 1968 in Santa Monica, California, USA. He is the son of Jane Cameron, a wildlife activist, and actor James Brolin. He is of Swiss-German, English, Scottish and Irish descent on his father’s side, and of English and Scottish descent on his mother’s side. He married Kathryn Boyd in 2016. He has two children Eden and Trevor. He was previously married to Diane Lane and Alice Adair. 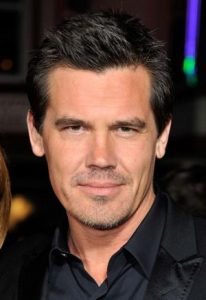 Josh Brolin Facts:
*His parents separated when he was 16 years old.
*He spent his childhood on a ranch.
*He enjoys racing cars and surfing.
*Follow him on Instagram.