Myriam Klink is a Lebanese-Serbian model, singer and activist who became known after her racy photo shoots. Her controversial music video titled “Goal”, was banned by the country’s justice ministry due to the appearance of a little girl dancing with Klink on the bed. She was born in August 14, 1970, to a Lebanese father and Serbian mother. 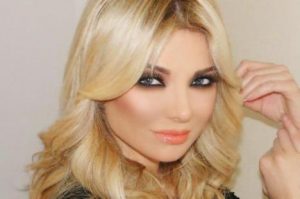 Myriam Klink Facts:
*Her father is Lebanese and her mother is Serbian.
*She learned to walk on the catwalk by watching models walking on TV.
*In 2013, she ran in the Lebanese parliamentary elections.
*Her pet donkey was named after fellow Lebanese singer Fairuz.
*Known for her crudely suggestive lyrics and borderline-p*rnographic social media posts.
*Follow her on Facebook and twitter.