Josh Hutcherson is an American film and television actor and producer. He is best known for his roles in the films Little Manhattan, The Kids Are All Right, Zathura, RV, Firehouse Dog, Bridge to Terabithia, Journey to the Center of the Earth and Cirque du Freak: The Vampire’s Assistant and the Hunger Games series, for which he won three MTV Movie Awards and a People’s Choice Award. From 2017 to 2020, Hutcherson starred as Josh Futturman in the science fiction comedy series Future Man on the video on demand service Hulu. Born Joshua Ryan Hutcherson on October 12, 1992 in Union, Kentucky, to parents Michelle and Chris Hutcherson, he has one younger brother named Connor. Hutcherson began acting early in 2000, and appeared in several commercials and minor film and television roles. He made his big-screen debut, in 2003, with a bit part in the Oscar-nominated American Splendor (2003). He has been in a relationship with actress Claudia Traisac since 2014. He was previously in a relationship with actress Vanessa Hudgens. 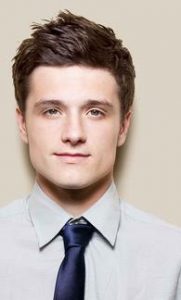 Josh Hutcherson Facts:
*He was born on October 12, 1992 in Union, Kentucky, USA.
*His mother worked for Delta Air Lines, and his father is an EPA analyst.
*He began acting early in 2000.
*For his role as Peeta Mellark in The Hunger Games, he won a CinemaCon Breakthrough Performer of the Year Award in 2012.
*He is close friends with Jennifer Lawrence, Liam Hemsworth and Ralf Koch.
*He enjoys playing basketball, rock climbing, and competing in triathlons.
*He is a huge fan of the NFL’s Cincinnati Bengals and credits Rudi Johnson as his favorite player, the University of Kentucky’s “Wildcats”, MLB’s Cincinnati Reds.
*He has two cats named Paws and Jell-O.
*He has three tattoos: one of a Libra sign on his left wrist, one of an anchor on his right torso side and a pirate ship on his back between his shoulders.
*He is fluent in Spanish.
*Visit his official website: www.joshhutcherson.com
*Follow him on Twitter, Facebook and Instagram.