Judy Greer is an American actress, voice actress, model and writer. She is known for her roles in television, such as Arrested Development, Married, It’s Always Sunny in Philadelphia, and Kidding, and in the films The Descendants, 13 Going on 30, 27 Dresses, Jawbreaker, The Wedding Planner, and the 2018 Halloween. She has also done voice work in the animated series Archer, Glenn Martin, DDS, Ask the StoryBots, Let’s Go Luna!, and Apple & Onion. Born Judith Therese Evans on July 20, 1975 in Detroit, Michigan, to parents Mollie Ann Evans, a hospital administrator and former nun, and Richard Evans, a mechanical engineer, Judy was raised in Redford Township and Livonia in Michigan. Her ancestry includes German, Irish, English, Welsh, and Scottish. She did her schooling from Churchill High School, Livonia, and graduated from DePaul University’s prestigious acting program in 1997. She married television producer Dean E. Johnsen on December 17, 2011. 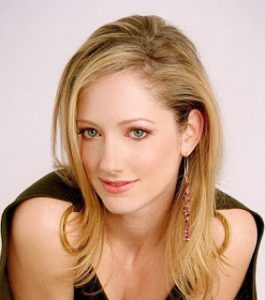 Judy Greer Facts:
*She was born on July 20, 1975 in Detroit, Michigan, USA.
*She was raised Catholic.
*She trained for nearly ten years in classical Russian ballet.
*She attended the Theatre School at DePaul University and graduated in 1997.
*She is friends with actresses Kellymarie Demaray and Aasha Davis.
*An avid knitter, Greer knitted a lot on the set of the television pilot “Dicks.”.
*She is a fan of Los Angeles Dodgers.
*Follow her on Twitter, Facebook and Instagram.