Actress Julia Louis-Dreyfus was born Julia Scarlett Elizabeth Louis-Dreyfus on January 13, 1961 in New York City, New York, the daughter of Judith Bowles and Gérard Louis-Dreyfus. Her paternal grandfather, Pierre Louis-Dreyfus, was from a prominent French Jewish family, while Julia’s other ancestry is German, Mexican, English, French, Scottish, and Scots-Irish. She is known for her work on the comedy series Seinfeld, The New Adventures of Old Christine, and Veep. She lives in Los Angeles with her husband and their two children. She is with the height 5 feet 3 inches in tall. She wears a size 7.5 shoe. Her zodiac sign is Capricorn. 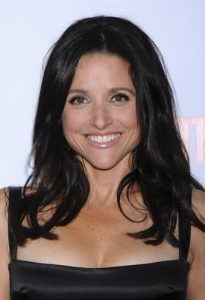