Julie Delpy is a French-American director, screenwriter, actress, and singer-songwriter who has appeared in over 30 films, including Europa Europa, Three Colors: White, Voyager, the Before trilogy, An American Werewolf in Paris, and 2 Days in Paris. Throughout her career, Delpy has been nominated for various awards, including three César Awards, two Online Film Critics Society Awards, and two Academy Awards. She released a self-titled album in 2003. Born on December 21, 1969 in Paris, France, she is the daughter of actor Albert Delpy and actress Marie Pillet. She made her first short film at age 12, then wrote her first screenplay at age 16. Delpy studied filmmaking at New York University’s Tisch School of the Arts. She moved to the United States in 1990, and became an American citizen in 2001. Delpy began dating German composer Marc Streitenfeld in 2007, and the couple had a son named Leo in 2009. They split in 2012. 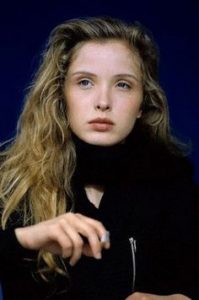 Julie Delpy Facts:
*She was born on December 21, 1969 in Paris, France.
*She was discovered by film director Jean-Luc Godard at the age of fourteen.
*She graduated from NYU’s film school.
*People Magazine named her one of the top 25 Most Beautiful People in the World in 1995.
*She has dual citizenship of French and British.
*She is good friends with actor Ethan Hawke and Adam Goldberg.
*She is a big fan of Marilyn Monroe.
*She has very poor eyesight.
*She was in a relationship with German film score composer Marc Streitenfeld from 2007 until 2012.