Mary McDonnell is an American actress of film, stage, and television. She is known for her roles in television, such as Battlestar Galactica, The Closer, Major Crimes, and E/R, and in the films Dances with Wolves, Passion Fish, Sneakers, and Margin Call. McDonnell earned Academy Award nominations for her performances in Dances with Wolves and Passion Fish. McDonnell’s other notable works include High Society, Independence Day, ER, Grey’s Anatomy, Mumford, Fargo, Blue Chips, Nola, and Crazy like a Fox. Born Mary Eileen McDonnell on April 28, 1952 in Wilkes-Barre, Pennsylvania, to parents Eileen and John McDonnell, her siblings are Jane, Jackie, Sally, Judith, and John. She graduated from the State University of New York (SUNY) at Fredonia, and attended drama school and joined the prestigious Long Wharf Theatre in New Haven, Connecticut, with which she worked for over 20 years. She has been married to Randle Mell since September 29, 1984. They have two children, Olivia and Michael. 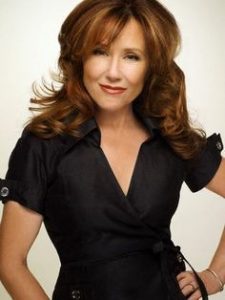 Mary McDonnell Facts:
*Born on April 28, 1952 in Wilkes-Barre, Pennsylvania, she was raised in Ithaca, New York.
*Her parents are both of Irish descent.
*Growing up, she was a competitive and synchronized swimmer.
*She began her career in theatre.
*She played Stands with a Fist in the 1990 film Dances with Wolves, for which she was nominated for an Academy Award.
*She has been a huge fan of Vanessa Redgrave since the 1970s.
*Follow her on Twitter, Facebook and Instagram.