Julien Kang is a French-Canadian actor and model who was cast in the hit reality show ‘We Got Married’. He is also known for his roles in television, such as Personal Taste, Twelve Men in a Year, Goodbye Dear Wife, and Fight for My Way. Born on April 11, 1982 in Saint Pierre and Miquelon, France, his father is Korean and his mother is French. His older brother Denis Kang is a well-known mixed martial artist. Kang made his acting debut in 2008, appearing in the TV series ‘Star’s Lover’. He signed with Jellyfish Entertainment in 2015. 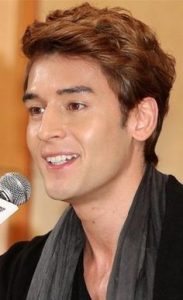 Julien Kang Facts:
*He was born on April 11, 1982 in Saint Pierre and Miquelon, France.
*He has two brothers.
*His older brother is mixed martial artist Denis Kang.
*He was appeared with South Korean actress Yoon Se-ah in the hit reality show ‘We Got Married’.
*Follow him on Twitter and Instagram.