Juliet Landau is an American actress who is best known for portraying the role of the vampire Drusilla in Buffy the Vampire Slayer and its spinoff show Angel. She played Loretta King in Tim Burton’s Ed Wood. Her other Credits include The Grifters, Theodore Rex, Neon City, Ravager, Pump Up the Volume, La Femme Nikita, and Millenium. Born Juliet Rose Landau in Los Angeles, California, she is the daughter of actor and Oscar winner Martin Landau and actress and three time Emmy winner Barbara Bain. She has an older sister, Susan Landau Finch, who is a producer. 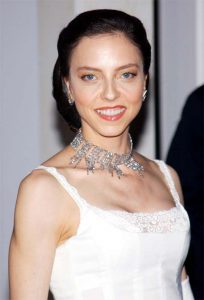 Juliet Landau Education:
She studied both acting and classical ballet at the American school in London.

Juliet Landau Facts:
*Her older sister Susan Landau Finch, is film producer.
*She had a regular role on the Buffy the Vampire spin off show Angel.
*She has performed with the Southern California Ballet and Los Angeles Dance companies.
*She was a professional ballerina and is a member of the Actors Studio.
*Follow her on Twitter, Facebook and Instagram.